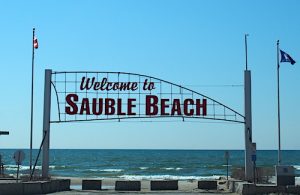 After 30 years’ absence, the piping plover returned to Sauble Beach in 2007, where they have been nesting every year since.

The piping plover is considered an endangered species on the Ontario Species at Risk listing and, therefore, their habitat is protected under law.

For larger views, Click on Images
Photos by Saugeen Times at successful 2014 nesting in Port Elgin

Unfortunately, South Bruce Peninsula Council did not see it that way and, in 2017, gave approval for the entire Sauble Beach to be raked using mechanical means resulting in the destruction of the Piping Plover habitat, both in the Spring before their arrival and again after the Plovers had left.  The two incidents resulted in two charges being laid against the town by the Ministry of Natural Resources and Fisheries (MNRF).

In 2019, following expert testimony in court, the Town of South Bruce Peninsula was, in fact, found to be at fault and fines totalling $100,000 were to be paid to Birds Canada.

The Town appealed the Court’s decision but, once again, on Monday March 8th, lost its appeal.  The convictions and fines remain.

Mayor Jackson said that, “We were very happy that the court overruled the Justice of the Peace’s ruling that the entire beach is habitat. That is what caused the need to appeal. The whole south end is not habitat and neither is any area where the willows are. Getting rid of the willows was what caused the issues in the first place.”

Just before the verdict was handed down the first time, in a Letter to the Editor (Saugeen Times), a concerned Sauble Beach resident pointed out that the Town had also sprayed the entire beach with a toxic chemical to kill vegetation despite that dangerous chemicals are being banned throughout the world because of their toxicity and carcinogenic properties and there are warnings, especially about applying near water sources due to the damage to aquatic life.

In a previous article in the Saugeen Times, it was pointed out that The Town of South Bruce Peninsula continued its move toward inappropriate beach maintenance.

Not only was the birds’ habitat destroyed but also much of the sensitive dune system was impacted.

Then, in 2020, the Town of South Bruce Peninsula again moved forward in Sauble Beach with a proposal to cut the dunes back from the roadway to allow for “more or safer parking during the summer months when tourism is intense”, to construct a cement block wall and ‘trim’ the dunes behind the wall to conform with its height.  Evidence of survey stakes show that not only will the dunes be affected but many trees and vegetation will also be removed in spite of the fact that dunes have been proven to be not only beneficial but vital to beach health.