As we head into a new year and new decade, we thought it would be interesting to look at 2020 within the frame of the Chinese zodiac calendar and discovered that this year is the Year of the Rat.

The Chinese calendar has 12 or 13 lunar months per year, and is about 20 to 50 days behind the Gregorian calendar and, basically, it just counts the moon or lunar cycles from one “spring” (Chinese New Year) to the next.  Therefore,  Chinese months begin with a new moon, and have a full moon on day 15. As a new moon comes roughly every 29½ days, the Chinese calendar months always have 29 or 30 days.

Each month is represented by an animal – rat, ox, tiger, rabbit, dragon, snake, horse, goat, monkey, rooster, dog and pig.  It is theorized that a person’s characteristics are decided by their birth year’s zodiac animal sign and element.

In Chinese theory, each zodiac sign is also associated with one of the five elements: Wood, Fire, Earth, Gold (Metal), and Water.  So, there are also five types of each sign and each of those has different characteristics. 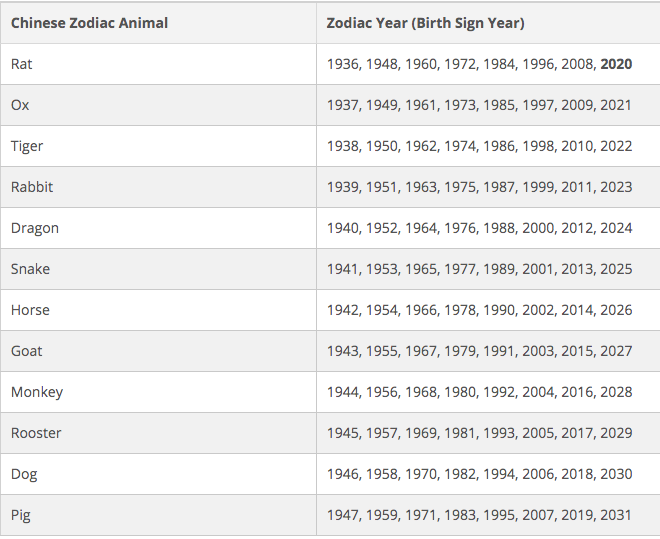 So, this being the Year of the Rat, what are the qualities of a ‘rat’ person?  Well, they are said to have good insight and sharp perspective, are cautious and meticulous and tend to take their work seriously, are full of energy and generally are healthy. They are also quick-witted, resourceful and smart, have rich imaginations and are thrifty.

Want to know what your zodiac sign is?  Look at the year you were born in the table above and then delve into your personality traits and things that are lucky for you within the Chinese zodiac … you might be surprised in this Year of the Rat.

Advocates set to protest as farmland continues to disappear to development

Habitat national writing contest asks students “What does home mean to you?”

Bruce Power named one of the Top Employers for Young People...